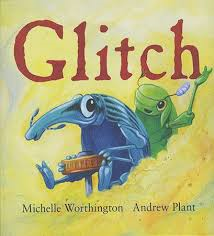 Glitch spends his life searching through mountains of mouldy mess at the dump. He wants to make the fastest billycart ever. This year, he will be competing in the Big Race! but will his twitch stop him from winning?

Poor Glitch. He has either got anxiety with low self-esteem, or has been affected by the toxic rubbish at the dump. He is a trembly, twittery, twitchy kind of bug. It doesn’t matter though, as Glitch is rather clever. Where we see rubbish to be buried in all its ugliness, Glitch sees potential and treasure to use in his grand billycart designs. And he is the best in the business!

Except … he has never finished a race.

This year, Glitch’s billycart is very fast. But on the test run, disaster strikes. The driver, his friend June, is hurt and can no longer be the driver. It’s now up to Glitch to take over driving his billycart.

He really doesn’t want to do it. He gives June all sorts of excuses. Underneath it all he’s scared. June listens carefully to Glitch and shares some wisdom with him, ‘Don’t let being scared stop you. It means you’re about to do something brave!’

Illustrator, Andrew Plant has pictured the dump with all its smells, rubbish, gloom and doom with precision. So well in fact that he pulls you into the story like you are there at the dump with Glitch and June, feeling every emotion with the characters.

Glitch is a wonderful book written by Michelle Worthington, to inspire and encourage children to step out of their comfort zone and to be brave. It is also a book about recycling and imagining other uses for things we throw away. Most of all, Glitch is a story of friendship, even when the going gets tough. Everyone needs a friend who believes in them.