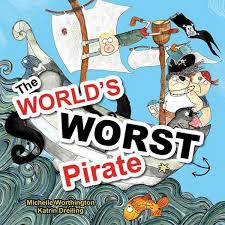 Will was the World’s Worst Pirate.
He didn’t want to be a swashbuckling, treasure hunting buccaneer.
He couldn’t even stand on deck without being seasick.
But when the ship is attacked by a terrible sea monster, a surprising hero saves the day.

Everyone loves stories about pirates, and everyone has a favourite pirate story. Somehow, I think The World’s Worst Pirate, written by Michelle Worthington and illustrated by Katrin Dreiling will become the mostest favouritest piratey-est story on everyone’s bookshelf.

This picture book is a treasure chest of surprises. There’s Will. There’s a Kraken. And there is a never ending game of chase with a cat and bird.

Will’s mother is the Captain of the Jolly Fishcake. Will tries really hard to be everything a pirate is meant to be, except … he is walking chaos. But there is one place where Will shines—the galley—it’s his happy place where he is the Masterchef of pirate foods.

Will’s mum isn’t happy though. She wants him to be a fearsome pirate on the seven seas, and one day captain the ship. What makes Will’s mum happy, makes Will miserable.

One particular day while sailing the seven seas, disaster strikes. A terrifying Kraken sticks its thick tentacles through the portholes of the ship searching for sailors. Will has to help. But what can a pirate chef do? Will that delicious cupcake in his hand save the day?

Illustrator, Katrin Dreiling has created fun, quirky piratey pictures for The World’s Worst Pirate. She has added movement with her skilled artistry so if feels like you are on the Jolly Fishcake with Will and the crew. Children will love the character expressions, and the cat and bird interaction going on in each page spread is a story in itself!

I highly recommend The World’s Worst Pirate as a shared picture book and for independent readers. It has something for everyone, with the underlying message to follow your passion, and it’s okay to be different to the rest of your crew.